****************************************************************
Ned LeDoux
One of the most incredible things about great music is that it has the ability to take the listener to a place they’d rather be.  A compelling song can carry someone back in time to a treasured memory, or transport a person to a spectacular western prairie they’ve only visited in their dreams. Ned LeDoux’s music has that kind of power. As a songwriter, he has a knack for bringing people, places and emotions vibrantly to life with his insightful lyrics, and warm, strong voice that makes him sound like a beloved friend you always want to hang out with. Those gifts are fully on display on LeDoux’s new album Buckskin.

“I’m writing my own story and if people take a liking to it, that’s wonderful,” says LeDoux. “As long as I’m writing from the heart, and writing about what I know, I can definitely listen back to it and be proud.”

On his third full-length album, LeDoux again delivers songs that transcend mere entertainment to celebrate a life that many aspire to, but few actually live. Like his father, LeDoux’s music is as expansive as the western sky he was raised under and celebrates the ranch lifestyle that is such an integral part of his heritage. There’s an authenticity to his songs that brings our nation’s beloved western culture to life, even for listener’s who’ve never ventured onto the Great Plains.

“I’m proud to carry on the tradition and a lot of songs that I write are going to relate with songs that my dad wrote and recorded because I lived the same life,” the young singer/songwriter says. “I was born and raised on a ranch, which my family still owns outside of Kaycee, Wyoming. That was my life and it’s reflected in the songs I write. I just think back to those days working on a ranch and hanging out with my granddad, who taught me how to drive a tractor, work cows and everything that is associated with ranching, but music has always been my dream.”

LeDoux began pursuing that dream at an early age, and even though he grew up in the shadow of his legendary father, he’s successfully carved his own path. “If I can be half the man he was I think I’ll be okay,” he says with an easygoing grin, “but when it comes to songwriting I’ve got to write my own story. I’ve played drums for years and got my first band when I was in junior high. I went on to play drums with my dad from 1998 until he passed away in 2005, and then I started doing solo gigs.”

LeDoux made his recording debut with the 2016 EP Forever a Cowboy and followed up with his first full-length project, Sagebrush, in 2017 and Next In Line 2019. All three projects, as well as his new effort, Buckskin, were produced by singer/songwriter/guitarist Mac McAnally, who has won the CMA Musician of the Year Award an unprecedented 10 times. “He’s my songwriting mentor and his guidance in the studio is wonderful,” LeDoux says. “He’s a great guy to be around. Nobody phrases things like he does.  I don’t know if there’s something in that Muscle Shoals water or what, but he’s a very inspiring character. He gave me great songwriting advice. He said, ‘Just write about what you know. Write the truth because it comes out a lot easier and people are going to believe you.”… 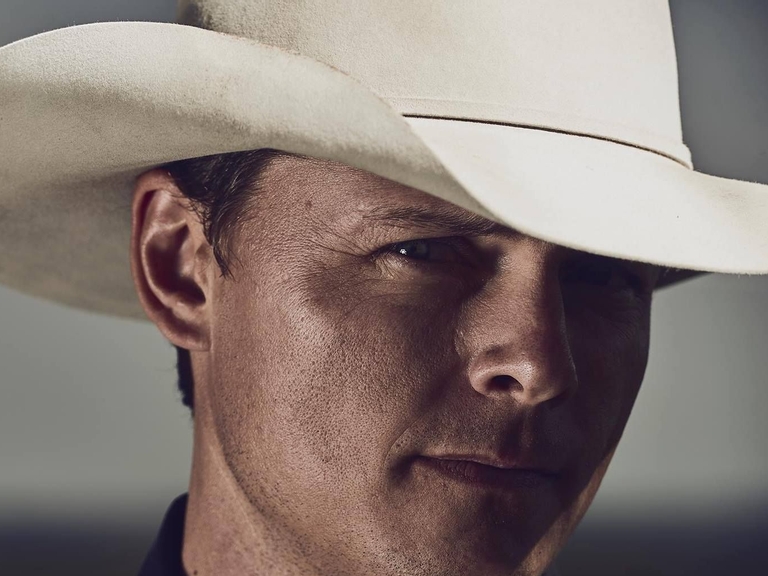 In country music, a last name like LeDoux casts a big, storied and bittersweet shadow, but it’s one Ned LeDoux doesn’t mind standing in one bit. Having been a drummer in his dad Chris’ band Western Underground since 1998, Ned knew from an early age that he had “no plan b” but to play music, “Once I got the taste of the road, and being in front of a crowd and just the sound of it, it was...freedom.” When his dad passed away in 2005 from cancer, Ned continued to tour with his father’s band to keep the musical spirit of Chris LeDoux alive. This drove him to pick up the guitar and try his hand at some of his dad’s songs. It started with “Rodeo Man,” and before long Ned had a whole catalogue of his father’s early hits ready to play. When the other band members heard Ned’s voice, he found himself front and center singing at the shows. Stepping out from behind the drums stirred something inside of Ned that he hadn’t felt before, “It’s a different kind of rush, getting up with a guitar and standing behind a microphone...shoot I’m getting butterflies thinking about it right now.” The timing couldn’t be more right for Ned to pick up a guitar and belt out “Western Skies;” it has been over 10 years since Chris LeDoux passed and he believes people want to hear something new. Ned has boxes of song ideas his dad never finished and is digging through those for inspiration, “I will kind of stick with what dad used to do but bring my own stuff to the table.” In July of 2015, Ned traveled to Nashville with some of those unfinished songs and met up with Mac McAnally to put that inspiration to work. Mac produced Chris’ last two studio records and wrote his hit “Horsepower,” so the collaboration with Ned was a natural fit and lead to the first new Chris LeDoux co-write in nearly two decades. His latest song “Brother Highway” is about all the time he has spent on the road touring with various bands since his days in high school. Ned says he doesn’t even need a road map anymore–that he and the highway are like brothers. He wants to write songs about what he knows, keep the themes simple and harken back to the sound of good ole country music but with an edge. Eventually Ned plans to release an album of new material and include a few of his dad’s songs re-recorded in his own style as a tribute. For the last year, Ned has been steadily touring and opening for acts like Toby Keith, Chris Janson and Randy Houser. Yet now that he is in front of the mic, Ned has a new goal. “There’s an age group who doesn’t know who Chris LeDoux is and I just want to keep his name out there. I want to reintroduce him to people who’ve maybe heard of him but didn’t know what he did. Just carry on his legacy and carry on his music and at the same time show them what I can do.” On tour, you’re guaranteed to hear “This Cowboy’s Hat”–the song most requested by his fans and a request Ned is honored to oblige. His personal favorite song to sing though is one called “You Can’t Tell Me We Ain’t Got It All.” It’s the first original song Ned co-wrote with his dad and seems to pick up right where Chris left off. And thankfully there is more to come as there is a new voice to carry on the LeDoux sound.